“We the peoples of the United Nations” must include indigenous peoples. Everyone has a role to play in building a new social contract for the common good of humanity and nature.”
— United Nations

August 9, a day that recognizes the rights of indigenous peoples is observed globally as Indigenous Peoples Day. On this day, the first meeting of the UN Working Group on indigenous populations was held in Geneva in 1982. The aim is to protect and promote the dignity, rights, culture and uniqueness of the indigenous peoples; to ensure that they do not suffer due to development; that they receive social and economic benefits.

Who are Indigenous Peoples?

They practice and have unique traditions, and retain social, cultural, economic and political characteristics that are distinct from those of the dominant societies in which they live. The Lakota in the USA, Torres Strait Islanders of Australia, Maori of New Zealand are few of the many examples of indigenous peoples around the world. In India, we have the Bhils and the Santals among several others. 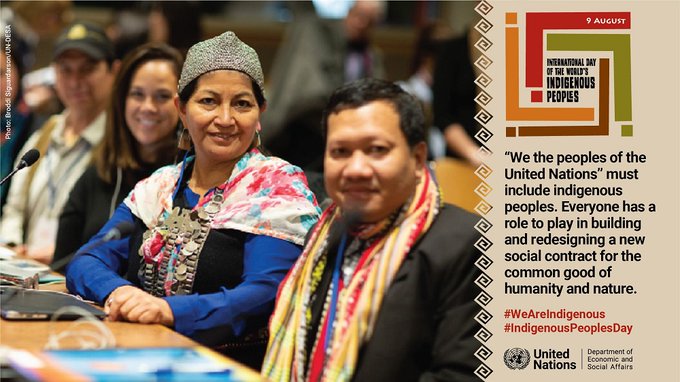 Indigenous peoples in India are found in Northeastern India. From Rajasthan to West Bengal, they are known as Adivasis. In Uttar Pradesh, tribes constitute less than 1% of the total population. It is home to a number of tribal communities such as Agaria, Baiga, Bhar, Bhoksa, Bind, Chero, Gond, Kol and Korwa. Five of these tribal communities have also been recognized by the Government of India as disadvantaged scheduled tribes, namely Tharus, Boksas, Bhotias, Jaunswaris and Rajis.

In Jharkhand, there are 32 tribes classified on the basis of their cultural types. While Birhor, Korwa, Hill Kharia are hunter-gatherer, Mahli, Lohra, Karmali, Chik Baraik are artisans.

The Fifth Schedule for mainland India and the Sixth Schedule for certain areas of north-east India recognizes indigenous peoples’ rights to land and self-governance. Further, India also voted in favor of the UN Declaration on the Rights of Indigenous Peoples (UNDRIP).

Leaving no one behind

The theme for 2021, ‘leaving no one behind’ calls for a new social contract with indigenous peoples and advocating for a genuine partnership in decision-making for the common good of humanity and nature.

Aboriginal or the indigenous peoples play a significant role in the protecting the environment and biodiversity. They manage 33% of forests that hold 80% of the world’s biodiversity. The tribal community in India that dwell in the forest are natural caretakers of the forest. The women in the community play an important role too. They work for the survival in forest and on lands.

They are the carriers of languages that are not taught or available in any school or text books. At least 40% of the 7,000 languages used worldwide are at some level of endangerment. But indigenous languages are particularly vulnerable. Further, they are the representatives of 5,000 different cultures who inherit and practice unique cultures relating to people and the environment.

It is important that the community is saved to ensure saving their culture and the biodiversity at large.

World’s 476 million indigenous peoples carry with themselves rich heritage and culture that may vanish if their rights- economic and social are not explored. They make up less than 5% of the world’s population, but account for 15% of the poorest. It is important that their voices are heard and their rights are protected.

According to 2015 World Bank studies, indigenous peoples have historically lived in rural areas and primarily relied on agriculture and natural resources to ensure their livelihoods. Over the time, indigenous peoples are increasingly residing in urban areas and work in a range of different economic sectors.

Humanity calls for addressing the problems and ensuring the rights of indigenous people  to safeguard their culture, livelihood, presence and the rich heritage and history they bring with themselves.